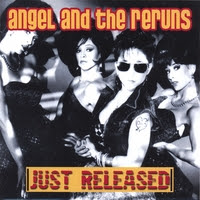 It all started in the early ‘80s when Hillary Carlip created the character of Angel as a parody, and ended up launching a hit musical career.

Meet ANGEL, who landed in County Jail for a “minor offense.” While in the slammer, Angel watched a lot of TV and became obsessed with reruns. Angel saw the light in the old shows and became dedicated to spreading the word of a return to a time when life was simpler and people were kinder.

She picked three other inmates to be her backup singers and the jailbirds turned songbirds forming Angel and the Reruns, the All Girl, all Ex-Con band.

Upon release from jail they recorded a single, which Hillary co-wrote with musician Miriam Cutler, who produced the songs. Hillary started her own record label, selling
Angel’s records out of her living room until she got a distributor. As "In Touch" magazine said: “Even without a major label Angel and the Reruns have managed to get one of their recordings onto the charts all around the country.”

“Buffy Come Back,” Angel’s controversial anti-drug ode to
Buffy from the '60s TV show "Family Affair" whose portrayer sadly overdosed at the age of 15, became an instant hit. It rose to the number one requested song on L.A.’s famed radio station KROQ, and stayed there for over 5 months. The song got national and international airplay as did the flip side of the 45, “Beaver Cleaver Fever.”

words from CDbaby.com link below...

This is one for any summer party...

Email ThisBlogThis!Share to TwitterShare to FacebookShare to Pinterest
Labels: Angel and the Reruns...

THANKS for the shout-out! So glad you're digging Angel and the Reruns, and I appreciate you spreading the word!

THANKS for the shout-out! So glad you're digging Angel and the Reruns, and I appreciate you spreading the word!