I've just had an e-mail from Eric's website to say he's hitting the road again in the U.S. Starting at the Chicago North Kalsted Market Days on the 9th August. 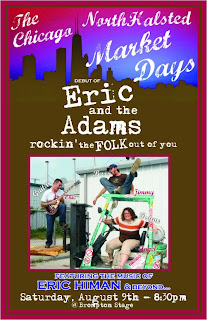 I know some of you have e-mailed me to say you really like his music so I thought I would link to his tour dates on here as well as give you a video to watch.
September: St. Louis, Louisville, Columbus, Pittsburgh, Philadelphia, NYC, Richmond, a Rhode Island College, DC, and Baltimore.

For a list of when and where just go to this linked page; Eric's Dates

Email ThisBlogThis!Share to TwitterShare to FacebookShare to Pinterest
Labels: Eric's on the road again...