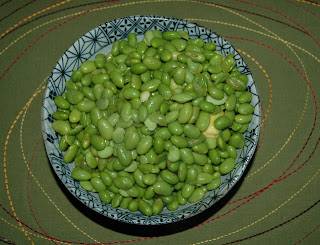 Lunch when I'm at home is one of the hard ones, first I want it to fill me up but also I want to use the time I have to get some goodness into my body. One way I have found to do this is Edamame Beans (pronounced ed-ah-mah-may) though most people will think of them as Soy Beans.

Edamame Beans are a good source of protein with a 50g serving providing 5.3g of Soya protein. Not only is this filling and help with a diet low in saturated fat, but it will also help reduce blood cholesterol. There has been some research on the reduction of risks of some Cancers when Soya is included in a daily diet.

How to cook: Bring a pan of water to the boil, add the Edamame beans. Return to the boil and simmer for 7-10 minutes. Drain and serve.

now to add a bit of taste I toss them in some Soya spread and season with garlic salt and freash cracked black pepper.

Now how about some dinner? 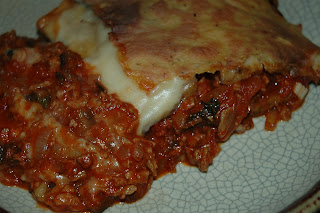 
Fry the sliced Eggplant in some olive oil till it is browned.

Boil the Potatoes for a couple of minutes and then fry in some Olive Oil till tender. Fry Onions in the Olive Oil and add the Garlic and Zucchinis. Add the Soya mince (which should be re-hydrated if you are using dried use the vegetable stock to do this). Add the Can of Tomatoes and the Pine Nuts. You may like to add some herbs here, though this wasn't done traditionally.

In a glass baking dish make layers of Aubergines, Tomato/Soy Mince sauce. Then do a layer of Potatoes and one of the white sauce, repeat till you have enough for one more layer. Make sure the top layer is a potato/white sauce mix (I add the Nutritional Yeast Flakes to the top layer of white sauce).