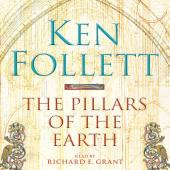 The Pillars of the Earth
By Ken Follett
ISBN: 9780330450133
As I said yesterday I had a few reviews to write and update you on. One of the reasons I may not have seen to be very active in the old book review department is for this book... I chose to do the unabridged version and at some 38 odd hours it took some time to get through. This epic book some may even say door stop was one of the best books ever. If you have the time to give over to this book and you want to know more about life at the turn of the last century then look no further than this book.
The only way I can describe the style of its writing is to imagine your looking at someone's platted hair, you have a main story that runs throughout the whole story, that of the building of the cathedral and then you have all the people who interact within that story. You will find yourself being taken on each of there journeys till they interact with another character and you then follow there story for a bit till the same interaction begins again. This story had me gripped and enthralled from beginning to end.
Synopsis from www.waterstones.com
"The Pillars of the Earth" tells the story of Philip, prior of Kingsbridge, a devout and resourceful monk driven to build the greatest Gothic cathedral the world has known; of Tom, the mason who becomes his architect - a man divided in his soul; of the beautiful, elusive Lady Aliena, haunted by a secret shame; and of a struggle between good and evil that will turn church against state, and brother against brother. A spellbinding epic tale of ambition, anarchy, and absolute power set against the sprawling medieval canvas of twelfth-century England.
You really should read this book...
Bear. X
Posted by Vegan Bear at 3:05 pm