If you love the dark stuff and you need to lose a few pounds off your booty you may be interested in a product that I just got through the post today. Spotted on the Ch4 program about future food the very cute Le Whif! 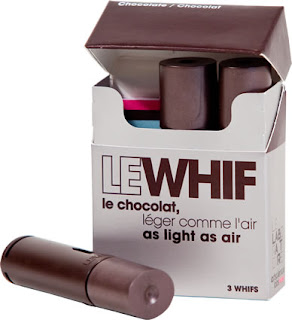 It couldn't be a simpler idea than a dispenser for Chocolate powder (they also sell one's that dispense Coffee or even Vitamins) I think we will be seeing a lot more of Le Whif in the future. 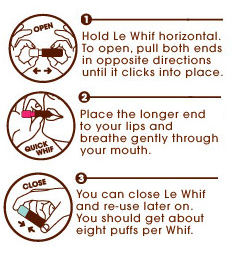 I have to say I really liked them, you get eight shots from each Le Whif and you get three in each box. I payed £3.99 with no postage, but they seem to differ in price depending on what website you go to.

Now the big question, what did I think? I've been crazy for Chocolate over the last week and as with anything your trying not to have you just can't get it out of you head. Enter Le Whif! I'm not sure it has stopped my cravings but it did take the edge off for a bit.

I'm not sure if I would buy the Chocolate ones again but I do think that I would look again at the Vitamin dispenser if I could get them cheap enough as I liked the idea that the Vitamins will get straight into your system quicker without being effected by your gut.