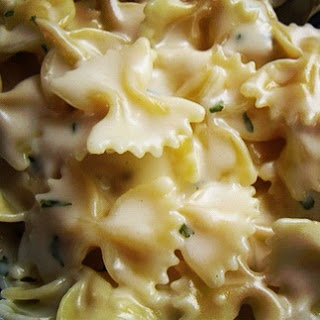 One thing I hear all the time is 'Cheese, Cheese, Cheese' I understand that it is addictive and as a ingredients it is versatile and now we have Vegan mock Cheeses its not like we are missing out any more.

But there is an issue, all of the Cheese alternatives are really high in kCal and would put anyone on a diet off using them as a ingredient for an every day dinner or snack. So, I hear you say, what can be done about it?

Here is my recipe for a simple Cheese sauce to go with pasta or steamed vegetables.


This recipe will serve 4 portions and is approximately 480 kCal for the whole recipe.

To make the sauce a bit posher you could add some chopped Chives as you serve it and this will add a light onion taste to it.

Alternatively if your doing vegetables in a Cheese sauce why not give it a bread crumb topping and flash it under the grill to give it a nice crunchy topping.