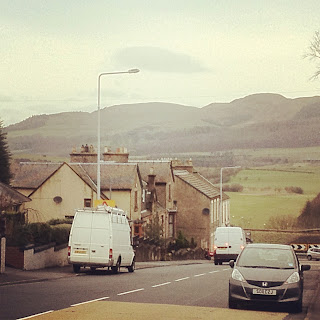 
So after a wait of just over two weeks I'm now up and running with an internet connection...

The Cottage is coming together after a few teething issues, they had some big storms up here the week before I arrived and we had lost some of the slates off the roof. Also in clearing our patio we had discovered the outside drain was blocked and causing a few issues with internal drains too. But its warm and dry and it feels like home now.

Having said all that we have another storm hitting today and the wind is picking up today and they are saying on the news that the bridges will be closed.

So what is Lochgelly like then? Well we have a high street that has like in the south seen better days, up here everyone seems to have a car and out of town shopping parks have sprung up everywhere. Put that together with a supermarket superstore every half a mile and I'm surprised there are any shops around at all.

We have a co-op supermarket and chemist, butchers, bakers, card shop, builders suppliers, we even have one or two cafe's and corner-shops. How any of this is managing to stay open with the economic downturn of the country I don't know.

I would call Lochgelly a village and according to Wikipedia it is... It's a mix of both traditional Scottish stone built cottages as well as modern new build family houses. I live in what would have been a two room cottage that has be extended up into the loft and out back into the garden making it a three bedroom cottage.

Now most of you will want to know about food? Well I'm going to keep that till another day as there is lots to talk about around that.

I hope you all had a good Christmas however you spent it.